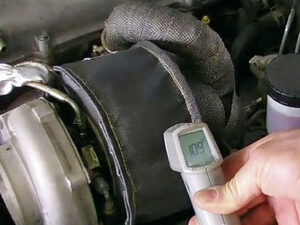 Turbo Blankets or Beanies where introduced for 4 key reasons:

Turbo Blankets have no doubt proved themselves to be very popular with turbo car owners, but will a Turbo Blanket really bring on Boost faster?

Luckily for us, graduate research assistant Steffen Bickle at the University of Texas decided to thoroughly investigate this theory.

He went on to conclude…”The time-to-torque improvement with the PTP Turbo Blanket was significant, especially for the last case, in which we used a simultaneous tip-in of the speed and the load, the time-to-torque improvement was impressive with an instantaneous torque improvement of up to 140 Nm. This led to an acceleration advantage of 250 engine rpm in spite of the fact that the duration was less than 2.5 s for the entire event. The improvement of the turbocharger performance provided this engine performance advantage because the turbocharger spool-up was faster which resulted in a boost pressure advantage of up to 0.3 bar when the PTP Turbo Blanket was mounted”.

I think that we can safely agree that a Turbo Beanie or Turbo Blanket is a very cheap and easy addition to any Turbocharged Car and the benefits are proven.

Check our the Kool Wrap range of Turbo Blankets or Beanies